People of TRL – Bob Cox, Runner and Publisher of the Winnipeg Free Press

Ted’s Run for LIteracy: When did you start running, and why?
Bob Cox: I started running longer distances in 1975 when I was 14. I had always run in elementary school – cross-country races, track events. But then I got into high school and stopped, for some reason I can’t remember. In the spring the school organized a 10-mile run to raise money for new gym equipment. I entered and showed up on a hot Saturday morning dressed in jeans and a t-shirt, wearing black canvas high tops. About two miles in at a water station, a teacher told me that I had better slow down because there was a long way to go. I did not heed the advice and finished second behind an 18-year-old on the track team. I started taking it seriously after that. I ran around the block every night – I lived on a farm so it was 4.5 miles. Then I doubled up and ran 9 miles a night. I ran past another farm one night and the farmer came out and offered me a job, which I held for four years. I was the best distance runner at my high school after that and often finished first or second in regional races. I ran my first marathon in Quebec City in 1982 and have been running and racing regularly for 40 years.

TRL: With your busy schedule as Publisher of the Winnipeg Free Press, when do you find time to run/ how do you work in training?
BC: I actually train very little in terms of pure running. I go to CrossFit classes almost every day and they include a variety of conditioning exercises that provide a strong fitness base. I fit in the CrossFit sessions mostly early in the morning – 6:30 a.m. – so they don’t interfere with work. On top of this I go for a couple of short runs during the week, about 5 km each. Then I do an ultra-long run on the weekends, usually at least 25 km. That gives me the training I need to be a competitive runner in my age group in local races at most distances.

TRL: You’ve just won a major race – what would the Free Press headline say?
BC: “Old guy beats youngsters” – I’m always happy just to win my age category (55-59), but I love being active and fit enough at my age to zip past people 25 years younger.

TRL: Do you have any pre-race rituals?
BC: Yes, I do a half-hour dynamic warmup with a lot of movements that I do regularly at CrossFit. A lot of it is yoga-inspired to loosen up the hips, stretch out the hamstrings and get you ready to run. And I always tie my shoelaces in a triple knot, a practice I started after the laces on one shoe came undone one time at the start of a race along the Rideau Canal in Ottawa. I bent down to tie it up, the starter sounded and runners tried to get past me, stumbling, tripping, even falling as they began their race by running smack dab into a stationary man. I was not popular.

TRL: What does Ted’s Run for Literacy mean to you?
BC: Ted’s Run for Literacy raises money for the kind of support that is crucial for at-risk kids. I can’t think of a more important way of building a stronger society. I grew up relatively poor. My father died when I was 11, leaving behind my mother and six children. But I always had three things – enough food to eat, supportive schools and running to keep me healthy and make me feel good about myself. Every kid should have the same. 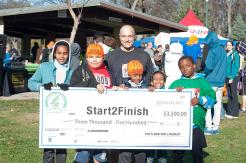 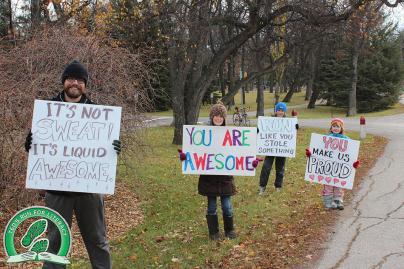